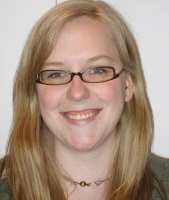 Introducing Becky Berckey, Director of Development at the Society for Contemporary Craft.
Let me preface this by saying that I am one of the few non-artists on staff at SCC. When I started working at here a year and a half ago, I made it a personal mission to learn as much as I could about contemporary craft because I knew I would need a strong foundation of understanding to do my job, as the Director of Development, effectively. This has been and will continue to be a long-time learning opportunity for me – and one that I quite enjoy.?
Recently my mom invited me to go with her to Asheville, NC for an antiquing weekend. I had no idea I was going to be visiting a major craft community full of practicing artists. I had heard of Penland School of Crafts and I knew ?at least peripherally? that it was in NC, but I didn’t know that, with Asheville being one of the closest metropolitan areas to the school,? a lot of practicing craft artists made Asheville their home.
My mom and I got into Asheville late on a rainy Friday night and checked into our hotel. The next morning, we got up and decided to just explore the city and see what we came across. I had seen an ad?for CURVE Studios on an area map at the hotel’s front desk. It advertised: “bringing people to art & art to life in Asheville’s River Arts District."?I needed to pick up a gift and thought it sounded neat, so my we made it a destination during our first day. We followed the map and (having no sense of direction) were driving down a road that was looking pretty deserted. There were abandoned warehouses and factories and it all looked run-down and grungy. Then we crossed over the river and were all of a sudden in the middle of Asheville’s blossoming River Arts District. There were a few retail stores, but mostly signs advertising open studios and artists-at-work. We pulled into CURVE Studios, which had three buildings surrounding a small but lovely garden (also filled with hand-made furniture and art). In each building were artists studios as well as small but welcoming retail spaces where you could browse and purchase the artists’ work. 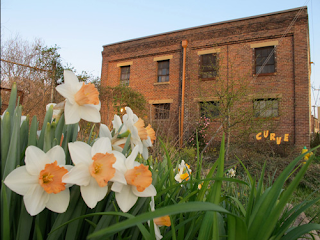 The first of the three buildings we went into was a ceramics studio. Three artists ? Akira Satake, Kyle Carpenter, and Maria Andrade Troya ? each using different clay construction, glazing and firing techniques, had functional ceramic work on display. The second building had more of a mix of artists: Constance Williams, an encaustic painter; Kelly Prestwood, a self proclaimed "artist blacksmith,? and Patty Bilbro, another functional ceramic artist.?The third studio had a big open space filled with fleece quilts. When I turned the corner, I found myself face-to-face with the works of Megan Chaney, a ceramic artist who SCC represents in the Store.? 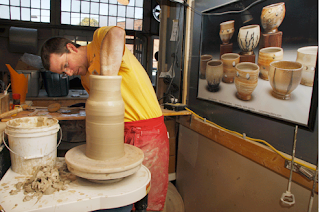 While I enjoyed all three studios and the mix of artists, it was with Patty Bilbro’s charming characters that illustrate her functional ceramic pieces that I immediately fell in love with. I picked up one of her mugs for myself that has an ostrich on one side who’s dreaming of a little girl on the other. I vowed to take my mug into work when I got back and beg Sharon Massey, SCC’s Store Manager, to carry Patty’s work (I’m happy to say Sharon has already contacted Patty, who will be sending us work for sale in the Store very soon).
My mom and I spent some time that afternoon exploring the rest of the River Arts District (which, in addition to 100+ artist studios, also has a micro-brewery and several restaurants). And as we spent the next couple days exploring downtown Asheville and the surrounding area, I was pleasantly surprised at how many artist studios and galleries we came across, all of which seemed to be busy with local foot traffic. ? 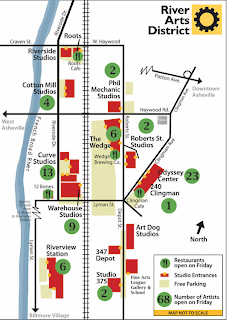 While I’m slightly embarrassed about excitedly asking my colleagues on my first day back at work "Who knew Asheville had such a great craft scene?,” everyone, very politely, declined to tell me, “We all did.” So thank you all for that bit of kindness. And now I know, too!