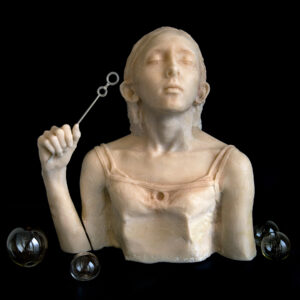 Dean Allison is an artist living in Pittsburgh, PA. Allison earned a Masters of Art in Visual Art from The Australian National University in Canberra, Australia in 2010, was a Penland School of Craft Resident Artist, has taught and exhibited widely across the US and internationally. His work is found in a number of public collections. Allison explores portraiture and figurative sculpture to tell a story or translate the human condition. He utilizes glass to represent the unique qualities of humanity as well as capture fine physical details which give insight to identity and allow self reflection. 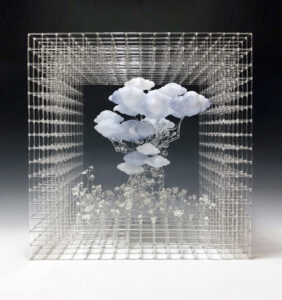 Korean-born glass artist Eunsuh Choi’s flameworked pieces are personal narratives, portraits of her own moments of growth. Choi arrived in the US having completed a MA in glass from Kookmin University, Seoul,  (KOR). Determined to pursue further glass education, she chose Rochester Institute of Technology (RIT) as a place where she could both study English and earn a second degree in glass. Choi has been working in glass for over 25-years and has broad knowledge of process and flameworking techniques. Her work is included in collections including European Museum of Modern Glass, Rödental, (DEU) and The Corning Museum of Glass, Corning, NY among others. 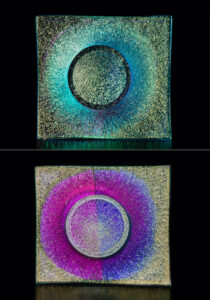 A graduate of Rhode Island School of Design, Donald Friedlich has been a leading figure in contemporary American jewelry for four decades. He served a term as President of the Society of North American Goldsmiths and on the Board of the Craft Emergency Relief Fund. He has been an Artist-in-Residence at the Pittsburgh Glass Center, The Studio of the Corning Museum of Glass, and Canberra School of Art in Australia. His jewelry has been shown in museums all over the world and is in the permanent collections of the Smithsonian American Art Museum, the Victoria and Albert Museum, the Museum of Fine Arts Boston, Cooper Hewitt Museum, and many others. 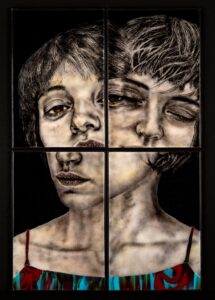 Michael Janis was born in Chicago, IL and currently lives and works in Washington, DC. He is Co-Director of the Washington Glass School & Studio. As the child of a Chinese/Filipino immigrant, and grandson of Greek and German immigrants, family histories and the struggle to assimilate have been a perpetual source for his narrative work that deals with understanding identity. Trained as an architect, his glass artworks often showcase his very disciplined approach to the medium. Janis’s work is included in a number of permanent collections across the US including the Art Institute of Chicago and the Museum of Glass in Tacoma. 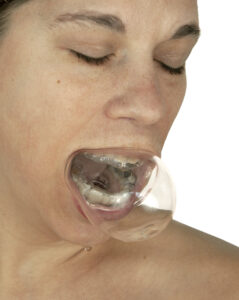 Based in Detroit, Lauren Kalman is a visual artist whose practice is rooted in contemporary craft, sculpture, video, photography and performance. Through performances using her body, her work investigates constructions of the ideal and the feminine and their impacts on self-image and identity, the politics of craft, and the built environment. Raised in Cleveland, OH, Kalman completed her MFA in Art and Technology from the Ohio State University and earned a BFA with a focus in Metals from Massachusetts College of Art. 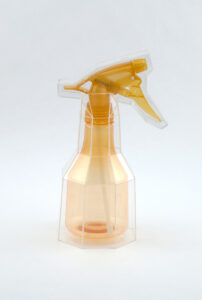 David King earned an MFA from Tyler School of Art and Architecture in Philadelphia, PA in 2011. King has twice been a fellow at WheatonArts, as well as an emerging artist-in-residence at the Pilchuck Glass School in Stanwood, WA. King’s work has been exhibited at a number of museums, and he has extensive teaching experience. He is a founding member of the artist collective, Flock the Optic along with Liesl Schubel and Abram Deslauriers. Established in 2014, the collective combines glassblowing performance with interactive installations, video projections, and sound sculpture. 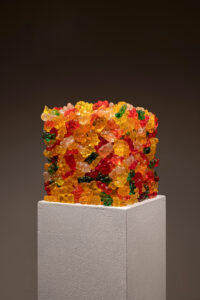 Born and raised in Tokyo, JPN, Eriko Kobayashi fell in love with both the color and texture of glass. This fascination led her to complete certification studies at Toyama City Institute of Glass Art in Toyama, (JPN) in 2016 and an MFA in glass at Southern Illinois University in Carbondale, IL (2022). Glass evokes Kobayashi’s urge to create, and the material introduces playfulness to the technically demanding skill of working with glass. Always seeking new stimulation, Kobayashi makes pieces that deepen thought and create a positive, energetic, playful experience. 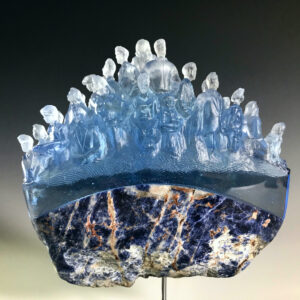 A resident of Tacoma, WA, glass artist Weston Lambert is drawn to the tension of contrasting attributes of strength and fragility with glass, and what it implies about the balance we negotiate within ourselves. Lambert received an MFA from Tulane University in New Orleans, LA and his BFA from the University of Hawaii at Manoa in Manoa, HI. His glass work has been included in Sculpture Magazine and Glass Quarterly magazine; and his works have been shown both nationally and internationally at The Toyama International Glass Exhibit, Toyama, (JPN), the Cheongju Craft Biennale in (KOR) and the Sculptural Objects Functional Art (SOFA) Exposition in Chicago, IL among other venues. In addition, Lambert has also recently completed public commissions for the cities of Seattle, WA; Chattanooga, TN;, Salt Lake City, UT and Geneva, IL.

Patrick Martin infuses socio-political themes in his mixed media sculptures to create a discourse between form, space, and content. He has received numerous awards and grants while maintaining a national exhibition record. Martin earned his BA from Centre College in Danville, KY and his MFA from Tulane University in New Orleans, LA. He has taught at a number of institutions and is currently a Professor of Art at Emporia State University in Emporia, KS where he was named the Roe R. Cross Distinguished Professor in 2017.

Born in Aichi, (JPN), Hisayoshi Muto started his career as a craftsman, lacquering Buddhist altars. Since that time, he has continued to pass on traditional techniques and hone his skills. At the age of 35, Muto began to explore new ways of expressing lacquer to convey the beauty and gentleness of the material to as many people as possible. Muto has exhibited his work widely throughout Japan. 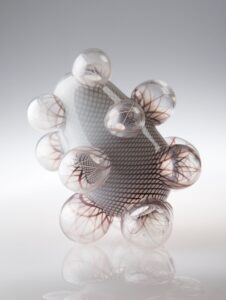 A Japanese artist based in San Bernardino, CA, Aya Oki’s technique of glass blowing is intended to express the true charm of glass. Her personal approach is born during the conversation she has while interacting with each piece. Her work is created out of her desire to convey the real pleasure of blown glass. Oki completed her BFA and MFA in glass at the Aichi University of Education in Aichi, (JPN). She attended California State University in San Bernardino, CA before completing her second MFA at Rochester Institute of Technology. Her works are in collections around the world including the Tacoma Museum of Glass, Tacoma, WA and The Corning Museum of Glass, Corning, NY.

Miroslava Ptáčková is a glass artist, sculptor, curator, and producer. She graduated from the Secondary School of Applied Arts in Uherské Hradiště, (CZE) majoring in stone sculpture. She continued her studies at the Tomas Bata University in Zlín, (CZE) in the Department of Glass Design, where she also completed her Ph.D. studies. She is currently the head of the Václav Chad Gallery in Zlín and the Zlín Design Market project founder. She actively participates in solo and group exhibitions throughout the Czech Republic and abroad. She lives and works in Zlín. 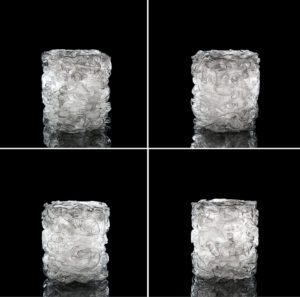 David Schnuckel is an artist whose work thinks through glass, a writer who examines issues related to glass, and an educator who challenges students to find visual solutions to conceptual problems by way of glass. He exhibits internationally and his artwork is included in a number of permanent collections. As a writer, he maintains a blog that examines elements of his making and teaching practice entitled David Schnuckel Uses His Words and is a regular contributor to GASnews, the newsletter of the Glass Art Society. Schnuckel is Assistant Professor of Glass at Rochester Institute of Technology in Rochester, New York.

Michaela Spružinová holds an MA in both Curatorial Studies and an MFA in Glass. She works and lives in the Czech Republic and focuses on working with recycled glass materials. Her materials are made from various pieces of glass, given a second life, and assigned a new artistic value. Spružinová spends long hours preparing these semi-finished products, making and modeling objects from small pieces of glass into spatial form. Her work is meant to relativize, or emphasize the importance of life situations. 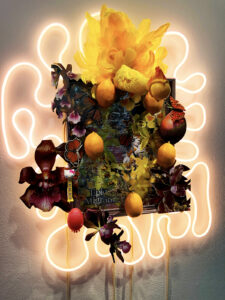 Ben Wright holds a BS in Evolutionary Biology from Dartmouth College, a BFA from the Appalachian Center for Crafts, and an MFA from RISD.   While at Dartmouth, he explored forests from upstate New Hampshire to tropical Jamaica to record and map song birds for the renowned ornithologist Richard Homes.  His background in Biology figures strongly in his artwork, which delves deeply into the ever evolving relationship between humans and their environment.   He has taught and exhibited his unique approach to art making at numerous schools around the country and abroad in Germany, Turkey, Denmark, Japan, Belgium, Poland and Australia. Ben is currently the Artistic Director of Pilchuck Glass school in Stanwood Washington.

Ayano Yoshizumi is a glass artist currently based in Toyama, Japan. Yoshizumi employs traditional glass blowing with acrylic painting inspired by Fauvism. After completing her BFA at Musashino Art University in Tokyo, (JPN) in 2014, Yoshizumi continued her studies at the Toyama Institute of Glass Art in Toyama, (JPN). She relocated to Australia in 2019 to participate in JamFactory’s Associate training program at the glass studio. Since returning to Japan in early 2022, she continues her practice at Toyama Institute of Glass Art. 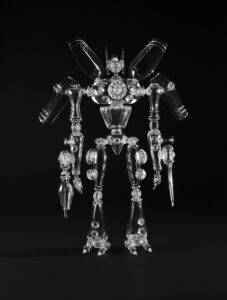 Hoseok Youn is a South Korean glass artist and educator specializing in glassblowing. He was born in Seoul, (KOR) and is currently based in the US. Youn holds a BFA degree in glass and ceramics from Namseoul University in Cheon Ahn, (KOR). After completing his undergraduate degree, Hoseok traveled to Japan for the International Glass competition in Niijima Island, Tokyo, (JPN). He was awarded the opportunity to study at Pilchuck Glass school in Stanwood, WA in 2018. Hoseok earned a MFA in glass from Southern Illinois University in Carbondale, IL. His work has received various scholarships and awards including Corning Museum of Glass, Pittsburgh Glass Center, Art Alliance for Contemporary Glass, Penland School of Art, Pilchuck Glass School, and Glass Art Society. His work is exhibited internationally.