Searching for Home opens April 9! Reserve your timed ticket here
Opening on August 14th at our Satellite Gallery in Downtown Pittsburgh, we are proud to present the amazing work of Scott Goss!
Highlighting his Glass Panel Series, this show will delve into Goss’s interest in deteriorating industrial cities. Currently a resident of Ohio, the artist earned his BFA in glass at the Cleveland Institute of Art in 2006.This series involves glass painting, engraving, fusing, and slumping; all to a piece of copper.
The theme of decaying urban centers and industrial detritus is fodder for many young artists these days. I am truly interested in in the appeal, because I myself find the subject matter beautiful in a sort of Western/Urban Wabi Sabi kind of way. Is it the stark contract between the colorful setting sun and the cold black silhouette of power lines? Is it weighing the differences and similarities between all that is natural and healthy vs all that is dangerous and cold? 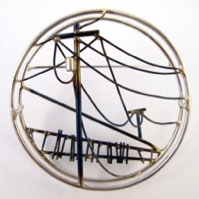 Caitie Sellers, an SCC LEAP Award finalist, is another artist who has felt compelled to reveal the beauty of her urban environment through her jewelry designs. After spending 4 months teaching in Xela, Guatemala, Sellers was taken by the city. She explains, “The architectural forms of this city, in particular the wrought-ironwork, has inspired my art both in imagery and concept. I draw upon patterns from window bars and wall tiles, made for the purpose of securing houses and businesses in a city where robbery is epidemic. It intrigues me that such beautiful and intricate work is dedicated to such an ugly purpose with potentially violent implications.” For her, the work is autobiographical – “protection of the delicate systems of our psyches, as their large-scale counterparts are physical protection from the threats of a dangerous street.” 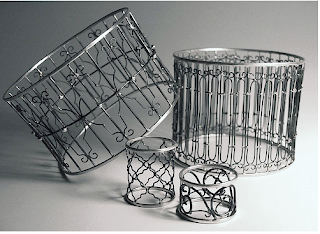 ?
Dan Kuhn, who was recently featured in our satellite gallery and is also a LEAP Award finalist, is inspired by the melding of the natural and industrial landscapes that define Western Pennsylvania. The rust-colored decals fired onto ceramic forms reveal ?engineered images of the Allegheny River? combined with photographs of Allegheny Ludlum and the surrounding towns, inferring a private connection and adaptation to the landscapes, ? explains Kuhn.
These are only three examples of artists whose work is inspired by the urban/industrial landscape, but there are many, many more. I would love to read about artist you like who are working within this concept. Email me your suggestions!