The Captain’s Congress, ?an installation by artist?Anne Drew Potter, is currently on view at the Society for Contemporary Craft. This 25 foot installation?consists of 16 distorted figures. All but one of the figures are placed in a circle, each wearing a jaunty sailor-style hat made from newspaper. The 15 ?Captains? are depicted talking at once, in an animated manner, and the lone figure seated outside of the circle?ironically larger, more naturally rendered?is at the mercy of these shorter and more distorted figures. Her face betrays a hidden voice, a desire to share and an interest in being included in the group. The installation explores concepts of self-appointed authority, ineffective communication, bullying and victimization.

With an interest in the complex and contradictory nature of the human experience, Potter creates ?performative? clay figures and unsettling installations that address the ways in which social meaning is projected onto forms of the body. By creating a tension between physical forms and exaggerated expressions Potter highlights signifiers of gender, race, and age and encourages viewers to confront their feelings about normalcy and difference. The artist explains, ?I am interested in the moment when the self-evidence of our own experiences is challenged by confrontation with the other, the infinity of realities that exist outside of our own.?? 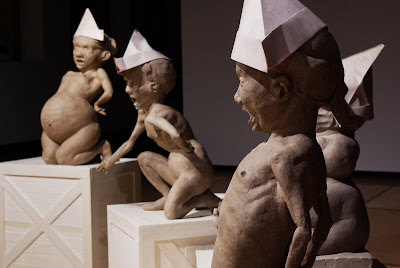 In his essay for this exhibition, The Thin Line of Embodiment, Professor Colin R. Johnson explains, “From a conceptual perspective, of course, Potter?s intention is never to?misrepresent stone cold ambiguity as a solution to the sexism, racism, ageism, and?homophobia she abhors. That would be easy, but it would also be na?ve. Rather, the ?point of Potter?s work is to lure viewers into the position of having to be explicit and ?suddenly aware of the manner in which they make sense through and around bodies?and, by doing so, to force some recognition that historically loaded characteristics such?as age, race and sex always define our relation to one another in advance, no matter?how sincerely we might wish to disavow their significance. ” 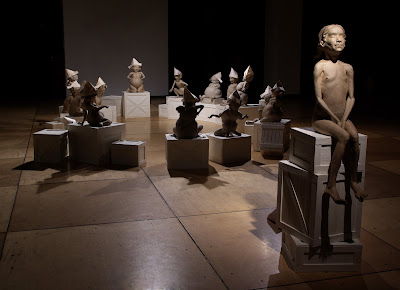 Potter was born and grew up in Berkeley, California, and her childhood and education were permeated with an activist social awareness. The artist attended Swarthmore College in Pennsylvania for her undergraduate education. Her studies in history and dance at Swarthmore both directly informed the content and form of her developing artwork and helped her contextualize her experiences and observations in terms of larger historical-social-political narratives.? 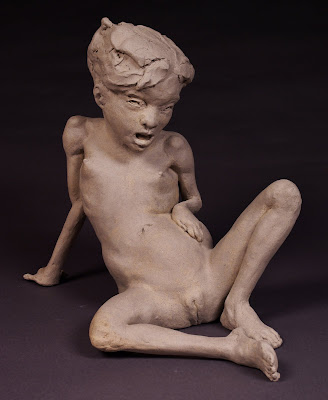 Potter went on to earn two MFA degrees, the first from the New York Academy of Art in New York, and the second from Indiana University, Bloomington.? Upon finishing her second MFA, she was awarded the Matsutani Fellowship at the Archie Bray Foundation in Helena, MT, where she was a resident artist until 2009. Potter was honored in 2009 by the National Council on Education in the Ceramic Arts (NCECA) with the Emerging Artist award. She recently completed a resident artist at Pottery Northwest. ?The artist currenty resides in Germany as a recipient of the German Chancellor Fellowship in order to complete a yearlong project at the Zentrum F?r Keramik in Berlin.? 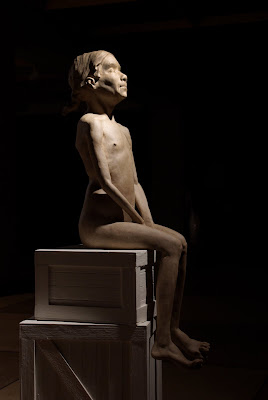 To see more views of this installation visit SCC’s?Flickr page.?