Skip to main content
By Janet McCall, Executive Director of Contemporary Craft (SCC)
The art community has lost a gentle giant, and SCC has lost a dear friend. Gregory Warmack, the self-taught artist known as Mr. Imagination, was called ?one of the supreme practitioners of visionary art? in the world by American Visionary Art Museum founder/director Rebecca Huffberger. ?Mr. I? died at age 64 this week, apparently from a spider bite that resulted in pneumonia.
Mr. Imagination?s life epitomized the way in which the human spirit can triumph over adversity to become a powerful positive force in the world. Born into poverty in Chicago, he was shot during a street robbery in the late 1970s, resulting in a near-death vision in which he was told he should dedicate his life to art. When he recovered from the shooting, he set about becoming an artist who could bring healing to the world. When his brother died in 2001, he felt the need for a fresh start and moved to Bethlehem, PA, where thrived there for several years. He travelled to many communities during this period, doing residencies to create public sculpture gardens with hundreds of young people, whose lives he touched. Three years ago when his Bethlehem studio burned to the ground, destroying his art, his belongings and beloved dog, he moved to Atlanta to be with friends and to heal. Soon he had put down roots, and started again. ?Even though I lost lots of things,? he said, ?I still have my gift.? 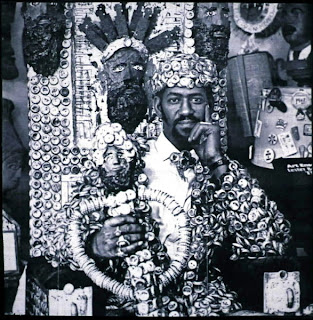 In November 2002 SCC featured Mr. Imagination in a one-person, mind-blowing exhibitionthat remains one of my all-time favorite shows. His art was very accessible, yet substantive. The gallery walls were painted a deep red, his favorite color, and the gallery was stuffed to the brim with his vibrant and expressive art ?furniture, installations, and sculpture ? all of it obsessively covered in bottle-caps and found objects. The centerpiece of the exhibition was a giant throne on which visitors were encouraged to sit. He explained that felt that everyone deserved to feel important and that sitting on a throne made it possible to savor that experience.
I was fortunate to host Mr. I as a guest at my home for several days. Hanging out with Mr. Imagination took me back to my childhood, and that state of innocence, spontaneity, and possibility, where the entire world was an art studio and the most mundane object could be transformed into something magical. The morning after his exhibition opening, as he headed out for a walk in my neighborhood, he noticed a few scraps of wood in the garbage waiting to be picked up at the curb. Delighted, he gathered them up, disappeared into our basement shop, and within an hour, came upstairs to present us with a small sculpture he had made as a gift.
For Mr. I, creating art was all about expressing love and making people feel special. Rest in peace, dear friend. You will be missed beyond measure but you deeply touched us all. 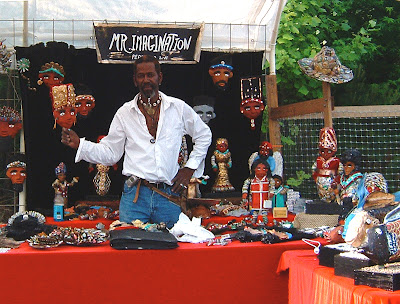