When I started a list of  individuals that I wanted to talk with as a way to bring you behind the scenes with craft artists, I knew that spending time with Tara Locklear was as absolute!  When I was previously at Contemporary Craft, working in the Studio, Tara was one of the first visiting artists that we scheduled to teach.  As a life-long skateboarder and fan of statement art jewelry, I was immediately drawn to her work.  But even more, Tara’s energy and approach to her craft is compelling.  I hope you enjoy getting a glimpse behind the bench with Tara… 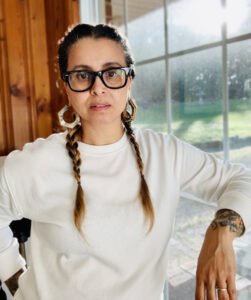 RR:  Let’s start at the very beginning…what brought you to jewelry?

TL:  I discovered jewelry when I decided to quit my corporate career of 11 years, where I was doing event planning and restaurant management in the restaurant industry. I had gotten really sick and stressed at an early age, which is why I resigned. But it wasn’t just about my health, I was miserable with what I was doing. I was working hard to climb the corporate ladder and do what was right for my clients, but I felt I was sacrificing my own ideologies around certain subject matters. And I had become so bitter. I didn’t realize it until I stepped away, but I think that happens with a lot of people, because we don’t tend to recognize certain things until we walk away.

I had bartended throughout my life and even during that corporate work, because I loved being around people. There was one bar that I really I loved, because it was kind of this dirty little rock bar and it was so much fun. Around the corner from there was this tattoo shop that I later went on to run the desk and manage.

Around that time in my life, I started going back to college because I wanted my degree, and I was taking a class here and there because I was paying for school up front. And actually, I discovered jewelry accidentally. A classmate of mine had suggested that I take jewelry as one of my electives, because it was a lot of fun. So, I said ok!

And total sidebar, during all of that Robert Ebendorf had been my neighbor. I never knew he made jewelry or knew that he was a historical contemporary jewelry artist and educator in our field (also he’s a total star). He only ever spoke about his daughter and cooking. Then, I take that jewelry class, and I discover who Bob really is.

TL:  Right, the whole time I was talking about going back to school and I’d be talking with him and my neighbor, he talked about every program other than his own. I had no idea that he was a Distinguished Professor! He was incredibly humble, and wanted me to explore every option to find what was my own. It reminded me so much of my dad, who was a machinist and an avid go-cart racer. I would build things in my dad’s workshop very early on just to hang out with him in the shop and when I dove into jewelry, I was filled with all of those memories – it felt so natural. I fell in love with jewelry immediately, even though I had no idea that I was going to make it my career. 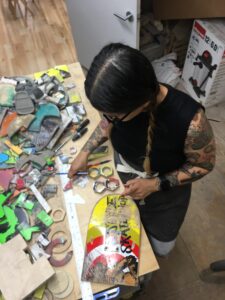 RR:  That’s what’s so interesting to me and what I love about craft, it seems to me that there’s often a lineage that exists. Obviously there’s a lineage that exists with Bob Ebendorf and his students – and so many other metals programs and their faculty and students– but even more and seemingly different than other visual arts, almost everyone in craft can tie their process back to a memory of working with their hands, or to someone very close to them who was working with their hands. It seems like that has influenced a number of people’s approach to making and in many cases, before people even realize that they have a practice.

TL: We all have so much life that we’ve lived, and things must happen to cause us to extrapolate our experiences. For me these were memories of making were just normal things that I did, everyday activities. I think for me, it didn’t resonate until I grew in my practice and set up my studio. When I looked around at my studio and realized the similarities in how I set up my space compared to my dad, and thought about how my dad was comfortable working at his work station, it sunk it. That’s why this practice is so comfortable for me, I watched someone everyday work with their hands. A lot of this resonated with me once I presented my portfolio in college, and Bob was such a mentor to me, still to this day. 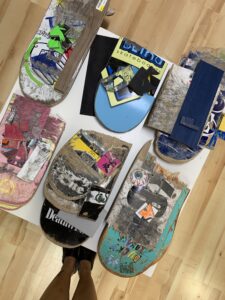 RR: Once you completed your degree and decided to start selling your work, how did the skateboards take center stage in your work?

TL: When I was making jewelry, I loved playing with the idea of preciousness and what holds value. I really loved the idea of saying, “No you don’t have to have expensive things. Value is in a memory; value is in a moment or a time or a place.” There was a project when I was still in school where we had to make a modern-day reliquary. While I was working at that tattoo shop, I would hear people talk about their skateboard and humanize it, “Oh my deck just died,” for instance. And I had never heard anyone objectify an object with such emotion – the way people talked about their boards – it was fascinating to me. I sat down and interviewed about 13 of my friends who skated because I wanted to know more about the ethos of that passion. When I talked with them, they talked about all of these affirmations that they had about themselves, and those answers woke up passions in me that I didn’t realize I had about myself, and my own activities. It was a pivotal moment when I knew I wanted to say something about this community, and how I wanted to represent these people in objects. I asked a few people from the skate shop for a small section of their boards as they broke, and at first people said no, because they didn’t want to give away a piece of their deck – that held their memories. I was learning as I went, these broken decks were more valuable than any type of economy. So, as people did open up to me, I felt like jewelry was the most democratic way for the objects to enter the world. 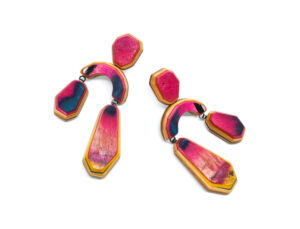 RR:  That’s interesting to me, because as you know I have collected a number of your pieces over the years because of how I connect to the work. I still skate, but I mostly longboard now because I’m older and don’t do tricks, I like cruising. However, the majority of time when I do skate now, it is usually when I’m on vacation or in Michigan, and I’m rolling around flat areas. What happens for me is then an accumulation of memories of where these boards have been or what has happened in my life during the times when I’m riding them. Similar to when I wear your jewelry I often wonder, “What experiences did this section of board have before it reached me,” because I understand the preciousness and the lived experience of that object. To me it’s different than how a piece of metal might have existed from foundry to fabrication.

TL: A contemporary jewelry artist and friend that I truly admire, Jillian Moore, stated it so brilliantly when she spoke of her work entering the world and what art jewelry is – it is so democratic because it’s outside of the gallery and it’s in the streets and it’s on people. I feel like it’s a similar essence to graffiti, which is even more democratic. Graffiti can go up and be gone in an hour.

For me, I’ll never forget when I was at the skate shop working and a guy that skated there often came in and said he heard I was looking for some decks. He had gone to his mother’s house and brought me a bag full of his retired decks. I asked him if I could make him something in return and he said no, because he knew that I’d do something good with the boards. From there it solidified to me that I had to do something that was special with these decks, because someone was entrusting me with their history. From there it started happening more and more, people were sharing their boards with me, which has been and still is the biggest compliment. These are important materials that carry moments in time.

Fast-forward, I’ve been working with that skate shop for 10 years now, and one here in Raleigh now for almost 7 years. When I get the boxes of decks now it’s like Christmas because I have no idea what’s in the box. I don’t know who has ridden them, and I don’t even know who the people are that leave the boards for me. Because nobody has ever wanted me to make them something in return, as of a few years ago I started buying a few new skate decks for every box that I would pick up, and I would just leave the decks at the shop. Because I knew there would be someone who would need one, or the shop could use them as a give-away at a competition, or something like that – so that I could give back. The skate community saved me, and taught me to be optimistic, to trust, and love again. 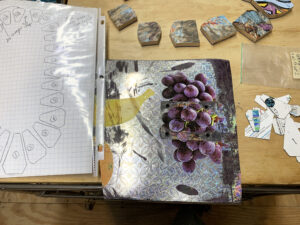 If you weren’t already familiar with Tara’s work, I hope you’ve found this insight into the genesis and evolution of her line compelling enough to look her up. And if you do know Tara’s work, then of course you’re familiar with the spirit of optimism and humanity that shines through each piece that she puts out into the world.

Artists like Tara are what drew me into the craft community, and what makes it feel like home.