We are currently recommending that all visitors please wear a mask.
Visit IheartPGH to watch the trailer!
Re-Post:
“Crafting and Storytelling ? Pittsburgh Screening of ?Handmade Nation?
Written by Lindsay
Topics: Uncategorized 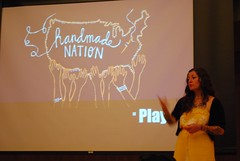 Handmade Nation is a documentary film about the rise of all things handmade and crafty by artist and filmmaker Faythe Levine. ? I first learned about this film at the Craft Congress ? a meeting of craft fair organizers ? that was first held in Pittsburgh in 2007.? You can read more about the Craft Congress in this New York Times article from December 16, 2007.? Again my path crossed with this film at the Art Activist & Equity symposium which was held at the New Hazlett Theater in 2008. 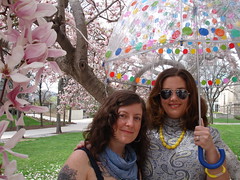 Faythe Levine gave a presentation about the inspiration for and her experience working on the film and a book about the project that really stuck a chord with me.? And even inspired me to take a filmmaking class at Pittsburgh Filmmakers last summer.? I left that symposium with a ton of knowledge ? Elizabeth Perry gave an amazing presentation on Twitter that made the whole thing make sense.? And hearing Faythe Levine talk about her experience of filmmaking ? I think she said something like ? and I could be off on this because it was over two years ago? ? there was a story to be told about this handmade movement ? there was more to it than people just making things and selling them at craft fairs.? Her thoughts really resonated with me as my experience with this blog has been about stories ? there are so many stories to be told about not only Pittsburgh but blogging as well.
Faythe Levine will be here in Pittsburgh for a screening of the film on November 6.? This event is cosponsored by the Society for Contemporary Craft and Pittsburgh Filmmakers.? The current exhibit at the society for contemporary craft is ? DIY a revolution in Handicrafts.
Handmade Nation Website ? http://indiecraftdocumentary.blogspot.com/
There is also a Handmade Nation book as well”