We are currently recommending that all visitors please wear a mask. 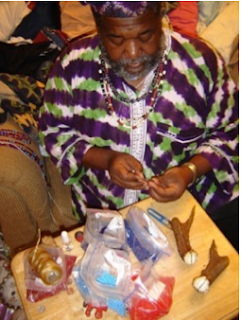 Hey gang! Did you know that Saturday is Juneteenth? A day which celebrates the day in 1865 that word of the Emancipation Proclamation, ending slavery in the United States, finally made it to the state of Texas. It is considered the date when the last slaves in America were freed. SCC is commemorating this? day with a really cool program:
Temujin Ekunfeo?s African Arts Of The Yoruba Diaspora. Through Temujin’s songs, stories, drumming and bead work, you’ll experience both performance and discussion while learning about the Yoruba Diaspora of Cuba and the US. The Yoruba, a large ethnic group from southwest Nigeria, were taken as slaves to Cuba. Because of their large numbers, the Yoruba were able to recreate their religion, values and language in the enslaved communities of the New World. A priest in the Yoruba tradition, Temujin Ekunfeo researches African folklore from the Americas and Africa and shares this knowledge by means of family-oriented, audience-participatory storytelling presentations, like the one he’s doing on Saturday. All of this is done in the ancient tradition of hailing crowds with his talking drum. This free presentation will be filmed for an episode of Humanities On The Road, a new series produced by the Pennsylvania Humanities Council to air on PCN.?
Saturday June 19th
2 pm (get there earlier to make sure you get a good seat!)
At the Society for Contemporary Craft at 2100 Smallman Street, PGH, PA 15222

If you scroll to the bottom of this blog there is a map, in case you don’t know how to get here.

Quick follow up on Flea Markets! Sadly I did not make it to the Little Flea on Saturday. I did get to the Pittsburgh Flea which was very small and a bit disappointing. Perhaps it was because they called for thunderstorms? I don’t know, but there were only a half dozen booths, some cool stuff, but didn’t make for a good Flea Marketing afternoon.?