Metalsmiths Lisa and Scott Cylinder and a Pittsburgh treasure, Chatham Baroque, join forces for a night of musical collaborations at the Society for Contemporary Craft (SCC) in the Strip District on Friday, October 26, from 6-8 pm.?Much like changing a piece of music from one key to another with historical reverence, the Cylinders transpose discarded musical instruments into exquisite jewelry. A series of the Cylinder?s wearable works will be featured on exhibition and available for sale. Chatham Baroque, an ensemble of baroque violin, viola da gamba, theorbo and baroque guitar, will perform a concert as part of the program. The event is free to the public and includes light refreshments.

Nationally recognized artists Lisa and Scott Cylinder began working together in 1988, after graduating from Tyler School of Art at Temple University in Philadelphia. For 22 years, this husband and wife team has collaborated from their studio in Oley, PA, to make small production pieces and one-of-a-kind, highly collectible art jewelry under the label of ?L and S Cylinder.? Their influences are as varied as their materials. With a reverence for Lalique, Spratling, Los Castillo, Jensen, Ken Cory and many other fine handcraftsmen, the Cylinders are always looking for that elusive inspiration from which their next concept will emerge. The work that will be on view at SCC is the result of an exploration that began with a discarded clarinet. Disassembled and repurposed, the deconstructed instrument merged into a body of work that transformed a once aural implement into a visual one. About this series of jewelry Scott comments, ?these well-crafted instruments carry with them a rich history of use: played, tarnished, worn, repaired, loved and hated. From practice room to concert stage, we are left only to imagine the stories each instrument could convey.? During the evening, the Cylinders will talk about their artistic process and how their love of music has directed them to an exploration of musical instruments.?

With their sharp technique and lively interpretations of 17th- and 18th-century music played on period instruments, Chatham Baroque engages local, national and international audiences. Founded in 1990, the ensemble presents a full calendar of concerts, tours and musical collaborations, and has recorded nine critically acclaimed CDs. With a nod to the repurposed instruments used by the Cylinders? to create their unique art jewelry, the 30-minute concert by Chatham Baroque will offer audiences the opportunity to hear baroque music that is accessible and thrillingly vivid, with an improvisational freshness akin to jazz. 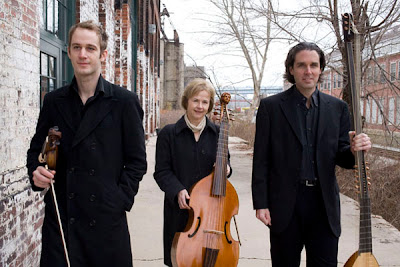 Baroque violinist Andrew Fouts joined Chatham Baroque in 2008. In performance with the ensemble, he has been noted for his ?mellifluous sound and sensitive style,? and as ?an extraordinary violinist? who exhibits ?phenomenal control?. In 2008, he won first prize at the American Bach Soloists? International Baroque Violin Competition. In addition to Chatham Baroque, he has performed recently with the Four Nations Ensemble, Apollo’s Fire, Musica Pacifica, Philharmonia Baroque, and as a soloist with American Bach Soloists. Patricia Halverson (viola da gamba) holds a doctorate in Early Music Performance Practice from Stanford University in CA. After completing her graduate work, she studied in the Netherlands at the Royal Conservatory in The Hague. A native of Duluth, MN, she is a founding member of Chatham Baroque. Her recent performances include concerts with Ensemble VIII of Austin, TX, the Washington Bach Consort, and a duo viola da gamba recital in Pittsburgh with Martha McGaughey. Scott Pauley (theorbo and baroque guitar) also holds a doctoral degree in Early Music Performance Practice from Stanford. Before settling in Pittsburgh in 1996, he lived in London, where he studied with Nigel North at the Guildhall School of Music & Drama. There, he performed with various early music ensembles, including The Brandenburg Consort, The Sixteen and Florilegium. Pauley has also performed with Tempesta di Mare, Musica Angelica, Opera Lafayette, the Folger Consort, the Four Nations Ensemble, The Toronto Consort and Hesperus, and has soloed with the Atlanta Symphony Orchestra.?