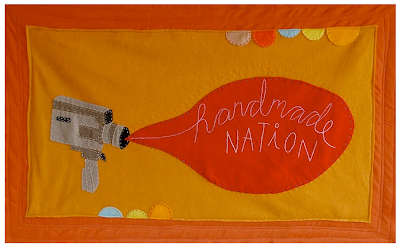 YES! We have confirmed the details. Handmade Nation will be screened in Pittsburgh at the Harris Theater on November 6th! The folks at Pittsburgh Filmmakers were incredibly nice and very willing to work with SCC to co-sponsor this event.
If you’re unfamiliar with Faythe Levine and her documentary Handmade Nation, she has a pretty great website and blog, but I’ll give you a synopsis too.? Handmade Nation documents the new wave of art, craft, and design through interviews with artists, crafters, curators, and designers working within the DIY movement.
Faythe Levine is considered to be a pillar of the DIY movement. In 2004, she started the Art vs. Craft fair which is known for showcasing new and innovative work from the Midwest while pushing the boundaries of what you would think to find at a traditional art or craft fair. Levine?s role in DIY has become more diverse from artist to curator, director, and author of a book with the same title as her film, Handmade Nation.
Handmade Nation, Levine?s directorial debut, frames the contemporary craft movement as evolving out of the indie-driven culture of the creation of Zines, punk rock music and the rejection of mass-produced goods. She see’s DIY as building an alternative to mainstream consumption, not a lifestyle trend. To create the documentary, Faythe traveled to 15 cities and covered more than 19,000 miles to conduct interviews with members within the DIY community.? Some of my favorites that are in the film include Jenny Hart, of Sublime Stitching, and Whitney Lee who makes pornographic hook rugs.

The Harris Theater, where the screening will be, is a beautiful place with a lot of history. Originally it was the first theater in Pittsburgh dedicated to showing “Art Films” and was called the Art Cinema, though it eventually fizzled out and became a porn theater in the 60’s. But, in 1995, with the coming of Pittsburgh’s Renaissance and the redevelopment of Liberty Avenue in downtown, the Harris was restored, renamed, and reopened to the public! It’s a classic with a balcony section and a big old-school style marquee.
Kicking off the first day of the Three Rivers Film Festival, the Harris will screen Handmade Nation on November 6, 2010 at 2pm. Following the movie, SCC is hosting a reception with Faythe Levine. There will be a chance to buy her book or dvd and have it signed. The screening isn’t up on there website yet, it wasn’t originally part of the film fest, but here’s hoping it’ll get up there soon!
Society for Contemporary Craft