Over the past three decades, Pittsburgh artist Edward Eberle has explored and tested the limits of porcelain, with his prolific body of work ranging from classically inspired vessels to altered and deconstructed sculptures. This career retrospective brings works from the mid-1980s to the present into dialogue allowing visitors to discover the timeless and intriguing work of a true master. Comprised of over 40 works, the show highlights the evolution of Eberle’s exquisite forms and fragmented, dreamlike imagery by featuring both his trademark porcelain work, as well as a series of works on paper. Audiences will see paper-thin, wheel-thrown, vessels of both closed and open forms, as well as more conceptual pieces from the early 2000s. The exhibition culminates with examples of the artist’s most recent mixed media sculptures and large paper cylinders.

This exhibition is made possible by the Jack Buncher Foundation, The Fine Foundation, Cohen & Grigsby, Ted Rowland, BNSF Railway Foundation, and media sponsors WESA and WYEP. Additional support is provided by the Allegheny Regional Asset District, the Elizabeth R. Raphael Fund of The Pittsburgh Foundation, The Heinz Endowments, Pennsylvania Council on the Arts, Richard King Mellon Foundation, and the Windgate Foundation. (As of July 2016) 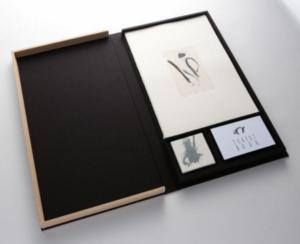 In conjunction with the Edward Eberle Retrospective,?Contemporary Craft is pleased to offer?Teapot Book: The Portfolio,?a limited edition collection?of prints by the celebrated Pittsburgh ceramic artist.

Beginning in the 1990s, Edward Eberle produced a series of 30 drawings, which considered the "idea" of the teapot. Teapot Book is a set of variations on a theme fusing Eberle's graphic art and ceramics through a?depiction of a vessel universally recognized for its simple form and function. Each print is signed by the artist, and a unique porcelain tile and descriptive essay accompany the portfolio in a customized solander box.

For additional details or to purchase?Teapot Book: The Portfolio, please contact Susan Hillman in The Store at shillman@contemporarycraft.org or 412.261.7003. Or stop by to see the portfolio in person. The Store at Contemporary Craft is open
Monday - Saturday; 10am - 5pm.