We will be closed on Wednesday, September 22 for a full day staff retreat. 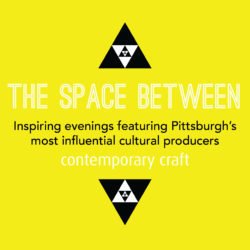 Contemporary Craft?s salon-style speaker series ? The Space Between ? invites two local thought-leaders representing different viewpoints and backgrounds to discuss the role of creativity within their respective fields. Each event is a fascinating and buzz-worthy local cultural evening of inspiring and revealing conversation.

Our featured speakers will talk briefly about their background and the way they approach the creative process. Topics may include the concepts and themes in their work, personal connections to craft, the use of language, color, and/or movement, and individual processes and techniques. The speakers and audience will then engage in an informal discussion inspired by the presenters? creative journeys and CC’s current exhibition, Oaths and Epithets: Works by Sonya Clark.

Plan to arrive early to experience the exhibition before the program begins!?The Space Between is free and open to the public with a $5 donation appreciated at the door.

Njie is a Pittsburgh based photographer, filmmaker, and multimedia producer.?Working across photo, video, writing, and curating, her work is rooted in social justice and?cultural enrichment. Njie is the Founder/Lead Producer of Eleven Stanley Productions?a?production company dedicated to creating stories based branded and original content. As the?creator of the multimedia series – Power(ed) by Grace, her work has earned coverage from?outlets such as the Huffington Post, the Carnegie Museum of Art blog, and Blavity. Beyond her?creative work Njie is an experienced educator and an avid traveler.?Njie earned a B.A. in Film and Media Studies from Washington University in St. Louis, and?an M.Ed in Secondary Education from the University of Missouri-St. Louis.

Carrington is a writer, artist, and change-maker. Carrington?s background includes experience in nonprofit administration and arts education. An accomplished poet and visual artist, Carrington is deeply involved with Pittsburgh?s spoken word community, and uses his creative practice to effect positive social change while exploring themes of identity and connectivity. He received his B.S. in Communications and Creative Writing from Slippery Rock University in 2011.