Meet Danielle James, our latest featured 2016 LEAP finalist. Her gritty, post-industrial-inspired jewelry captures the nostalgia and beauty of a bygone era. Shop her work in the Store throughout April and May. 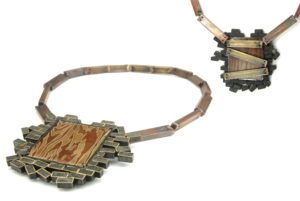 CC: Tell us about your work.

Danielle James (DJ): My series Mobile/Station is my method of documenting, preserving and interpreting interactions with the communities I end up visiting while traveling on the non-interstate highway systems of the U.S. During the last five years I have made a goal for myself to only travel via what William Least Heat Moon calls “blue highways” or non-interstate road. This two lane travel sometimes directs me into towns that seem to be frozen in time and aspects of these locations usually end up in my work.

Growing up in the North East I experienced historically preserved city centers that gave way to endless urban sprawl and demolishable architecture. Moving to North Carolina for graduate school I immediately noticed the large amount of 100+ year old farms houses and barns that were just left alone to age and settle. I fell in love with these structures and the stories they told through context clues and ware marks. When explaining a piece of my jewelry I am also telling a story about a location or a person who has changed me in some way.

CC: Could you share with us how your background and education influenced your work? 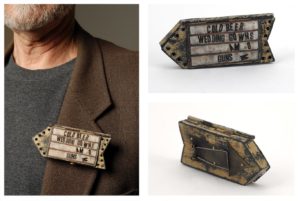 DJ: I grew up in a small town in the second smallest US state, Middletown, Delaware. At any given time I was less then half days drive from Philadelphia, Baltimore, D.C. or New York City so it was a good place to grow up. My house was located very close to U.S route 13, which runs 517 miles from interstate 95 just north of Fayetteville, North Carolina to the northeastern suburbs of Philadelphia. Across from this highway was Frightland Haunted Attraction, the Northeast’s biggest haunted house and hayride. Every October I was drawn like a weird teenage moth to a flame and worked my way into being a set builder, painter and eventually makeup artist for the attraction. I worked there for eight years, until I moved South for graduate school. I believe my background in set design and the theatrical absolutely influences the diorama quality of my work.

Recently, I had a revelation that perhaps my fascination with transience and travel via road trips might be caused by my growing up in such close proximity to that major tourist thoroughfare.

CC: Why were you drawn to making jewelry?

DJ: Honestly, my decision to get into metals was a complete fluke. I started as an art education major at Millersville University outside of Lancaster, PA. During the first few weeks of classes I participated in a ring making fundraiser held by the metals guild and I had a blast, it was something I had never done before and the people in the guild were really nice. Shortly after that I took Metals I with the incredible Christina Miller. I was voted most artistic in high school and at this point I was still suffering from big fish in little pond syndrome. Our art department was very tiny, though, so that pretty much meant jack.

My first metals class turned out to be expensive, time consuming, stressful and frustrating. After my first semester of rushing to meet deadlines, turning in half completed projects, and spurning the gods of craftsmanship repeatedly, Christina called me into her office. She bluntly explained that I probably should not take Metals II next semester because I barely passed Metals I and my work ethic did not meet expectations. This was the moment I made up my mind to major in metals. My decision was purely out of spite, anger and a bit of embarrassment. I decided to commit to what up until that point had been the most challenging media I had come across and I believe it was truly one of the best decisions I have ever made.

CC: What inspires you? 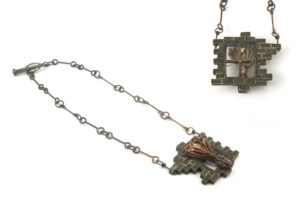 DJ: First, I respond to humor. If a sign is sexually suggestive or the angle of a certain brick is off kilter I tend to find pleasure in photographing the crap out of it and eventually making a wearable piece of art based around that slightly off experience. Secondly, living in the 21st century has made be extremely nostalgic for a time when the U.S. made more, built more, and are more involved in their own manufacturing processes. So when I see a busted neon sign I will usually pull over, get out my camera and inspect the craftsmanship of what I consider to be the relics of the road.

CC: What is the best piece of advice you’ve received as a new artist?

DJ: One of my first artistic mentors and professors at Millersville, Ben Cunningham, gave us all in my 2D design class a quote on a piece of paper and I have always had it in my studio ever since. It is a bit wordy but it never fails to help me when I am feeling down about my work. I now give a copy of it to all my foundation students. ?Becoming an artist is a lifetime process. It begins with the way you see things. Then you want to express what you see and feel. You try something. Explore it. Change it. Rework it. Destroy it. and start it again. Each time you discover something new about yourself.

Becoming an artist does not stop with time or circumstance or job or age. It may earn you a lot of money. Or none at all. Its real value is in yourself. A way of life. But, it’s not a life for everyone. Those who choose it, find the highs can be very high. Just as the lows, very low. But one things is certain. Life is never boring. And the best part is that your whole life is spent in becoming. So you can always look forward to change.

CC: What advice do you have for others considering a career in the arts?

DJ: Be versatile. I used to think that specializing in one thing was the best possible outcome for anyone one person’s life span. I wanted to control everything and was literally petrified of being a Jill of all trades and a master of none. Eventually I asked myself who really has the right to care but me.

The more I work in the creative world the more I understand the connection between seemingly random events in my life. My haunted house training led to being comfortable working in large groups and that led to my theater (almost) minor. The theater community led to a theater party where a complete (stranger who ended up a metals major) and I had heart to heart. That same conversation prompted my attendance at ring making workshop my first semester of undergrad. The rest is history. Try not to dismiss random occurrences, they can become the intersections in the connect the dots puzzle of life.