Skip to main content
Ok, I know I said my next post would be about Braddock, but I’ve decided to push that back for now to cover PGH, the green city.?
How many cities have you been to where you can disappear into a public park and forget you’re in the middle of the city? Central Park in New York is a man-made wonder. Lincoln Park in Chicago is a treasure to the people of the Windy City. What I like about Pittsburgh City Parks is that there are so many. If fact, there are dozens of small, lush parks through out the city so that no matter where you live, you can probably walk or take a quick drive to get your fix of green. The city and surrounding areas offer a wealth of activities year round including swimming, skating, hiking and biking, kayaking, and during the summer, “Cinema in the Park.”
But the parks are a work in progress. Organized in 1996, The Conservancy was established to restore Pittsburgh’s four (now five) Regional parks – Frick, Highland, Riverview, and Schenley. Through an enormous amount of effort from volunteers this organization has raised $50 million and turned these parks into something to brag about. In addition to great outdoor space, this city is criss-crossed with trails for walking, hiking, and biking, including the famous Great Allegheny Passage (GAP) rail-trail, which offers 135 miles of hiking and biking between Cumberland, MD, and Duquesne, PA, near Pittsburgh. The cities newest Regional Park – Emerald View Park – not only boasts one of the best views from the top of Mount Washington, but they are developing 19 miles of hiking trails. Through the Knit and Crochet Trail Markers Project, knitters and crocheters of all skill levels are welcome to participate in making biodegradable trail markers from cotton yarn. The markers will be used to identify trails in the Emerald View Park in the Allentown, Duquesne Heights and Mount Washington neighborhoods. Much of the material for this project was supplied by Knit One, in Squirrel Hill.
But the green isn’t confined to just the parks. Tree Pittsburgh speaks for the trees, supporting our urban forest, and keeping our city street trees looking nice and healthy!
Community gardens also help to keep Pittsburgh neighborhoods healthy by providing a local source for nutritious food and by promoting community involvement. Grow Pittsburgh supports a number of projects that demonstrate, teach and promote responsible urban food production.?

No longer the Smoky City, the changing industry of Pittsburgh has led to significant improvements in the region. Rebecca Flora of the Green Building Alliance explains, “As home of the world’s first green convention center, and host to 5,000 people for the U.S. Green Building Council’s (USGBC) national Greenbuild conference in 2003, Pittsburgh is recognized as a leader in the global green building movement.” WYEP, the “First Green Station in the Nation”, and the Allegheny Front support a series of green workshops around the city to encourage citizens to venture outdoors and be conscientious of their impact on our environment. Bike PGH is tireless in its efforts to support bicycle advocacy, safety and culture ? cutting down on traffic congestion and pollution. 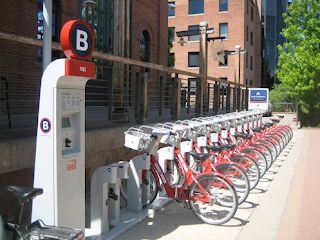 There are many excellent examples of how Pittsburgh is working hard to make a positive change. Obviously the city isn’t perfect, there is still a lot that can be done, which means there are a lot of ways to get involved and make a difference! Check out the Pittsburgh Green Story for more information about the city’s transformation. 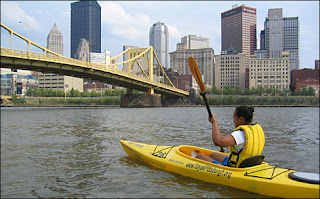